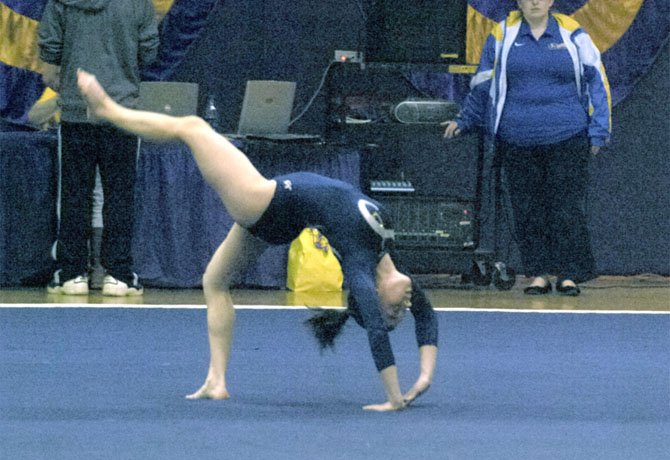 Lee senior Katie Stewart qualified for regionals with a third-place finish at the Patriot District meet on Feb. 3. Photo by Craig Sterbutzel.

Leah Michetti and Katie Stewart are heading back to the Northern Region gymnastics meet.

For the second year in a row, Lee teammates Michetti and Stewart qualified for regionals in the all-around with top-four finishes at the Patriot District meet. Michetti placed second on Feb. 3 at Lake Braddock Secondary School, finishing with a total of 36.15. Stewart took third at 36.025. Lake Braddock’s Caitlin Liberatore (first, 36.6) and West Potomac’s Monica Thompson (fourth, 35.8) secured the other two spots. 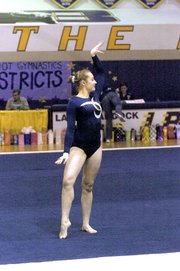 Lee junior Leah Michetti placed second in the all-around at the Patriot District gymnastics meet on Feb. 3 at Lake Braddock, earning her a trip to regionals. Lee senior Katie Stewart also qualified for regionals with a third-place finish.

One year after winning the district title and placing seventh at states, Michetti felt fortunate to finish second at districts after an early miscue on bars.

"I’m feeling OK," she said. "Based on my performance today I’m really happy to be in second. I had a huge mess up on bars and I thought that was going to take me out completely, so I’m happy to end up in second."

"It was touch and go to start and then they really had to perform to be in the top three, so it was an uphill battle," Lee head coach Val Taguding said. "They finished strong."

Michetti said it will be nice to have a teammate at regionals.

"It’s really exciting to know that Katie’s going, too," Michetti said. "I feel like that’s just a lot of extra support."

Freshman Elisabeth Michetti qualified for regionals on vault with a score of 8.9, good for a seventh-place tie.

Lake Braddock won the team championship with a total of 140. Woodson earned the other team berth to regionals with a runner-up total of 136.1. Lee’s third-place total of 131.15 set a school record.