It is essentially unheard of to have two Olympians from the same high school participate in the Olympics together, said Stone Ridge School of the Sacred Heart, which had alumnae Phoebe Bacon (Class of 2020) and Katie Ledecky (Class of 2015) swim for Team USA in the Tokyo 2020 Olympics.

For her debut appearance at the Olympics, Phoebe Bacon ‘20 swam the 200 meter backstroke. She had an impressive showing finishing 5th in the finals, behind her teammate Rhyan White. Phoebe is currently a sophomore at the University of Wisconsin.

Katie is a 2020 graduate of Stanford University, where she earned a degree in Psychology. Katie celebrated her graduation at the Olympic swim trials in Omaha.

"What a thrill it has been to watch Katie and Phoebe compete this week,” said Stone Ridge Head of School Catherine Ronan Karrels '86. “Stone Ridge is incredibly proud of these alumnae athletes, not only for what they accomplish in the sport of swimming, but for the values and character they represent."

Athletic Director Andrew Maguire said: “During their time at Stone Ridge, Katie and Phoebe both led by example with their passion for representing SR and their incredible competitive drive for achieving at a level far greater than their peers.”

The Stone Ridge community celebrated these two swimmers with a pep rally on July 19 with more than 250 people in attendance. 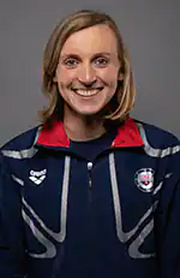 Personal: Daughter of David and Mary Gen Ledecky; Has one older brother, Michael, who is also a swimmer and a graduate of Harvard College. Began swimming at age 6 with her brother for a summer league swim team. 2016 Female Olympic Athlete of the Games and 2017 Female Olympic Athlete of the Year by the United States Olympic Committee. Eight-time individual NCAA champion and two-time team NCAA champion at Stanford. 2017 Collegiate Woman Athlete of the Year winner (Honda Cup). Youngest member of 2016 U.S. Olympic Swimming Team. 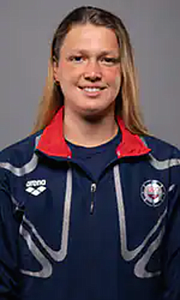