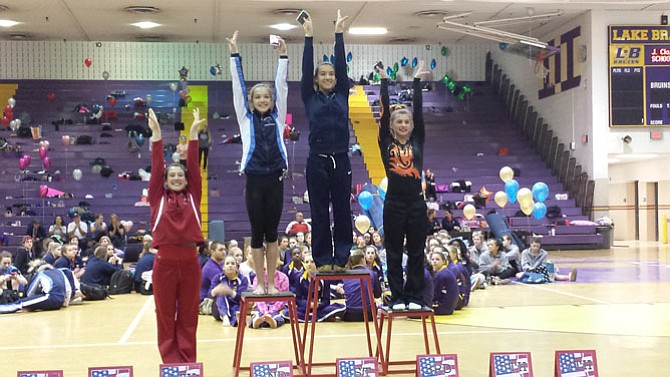 Another stellar performance from senior Sophie Hatcher wasn’t enough to save the Washington-Lee gymnastics team.

One week after winning the all-around competition for Conference 6, the most competitive conference in the region, Hatcher stood atop the medal stand at the 6A North region meet, having won the all-around with a score of 37.65.

“If you looked at the individuals, there were only one or two [Battlefield] kids up on the medal (stand),” W-L head coach Joe D’Emidio said, “but they had better depth than we did.”

While W-L fell short of states as a team, Hatcher will represent the Generals as an individual.

“I’m obviously really, really happy that I got first and I’m really excited to compete at states, but we were really hoping to make it to states (as a team) today,” Hatcher said. “But although we didn’t make it, I’m still really, really proud of what we’ve all done this year. We didn’t even know if we would make it to regionals and the fact that we made it here [is an accomplishment]. We still got third.”

“Sophie was, again, on a roll,” D’Emidio said. “She won the all-around at conference and here she is, not missing a beat. We just hope that beat keeps going all the way to states. We’re following her excitement and the team is still excited for her that she’s advancing.”

The state meet is scheduled for Feb. 20-21 at Patriot High School.

Washington-Lee won’t be the only Arlington school sending gymnasts to states.

“I’m just so excited,” Kane said. “I really wanted to make it to states. I was confident that I would make it on one event, but I was very surprised I made it on all-around.”

Conference 6 gymnasts check in before their bar routines during the 6A North region championship meet on Feb. 11 at Lake Braddock Secondary School.

Kane was limited for most of the season after breaking her left thumb. She competed in the all-around for the first time during the Conference 6 meet on Feb. 2, where she qualified for regionals.

Kane’s bars performance came in a small gymnastics room at Lake Braddock, after there was a problem with the equipment in the main gym.

A judge instructed fans and fellow gymnasts to be quiet during Kane’s routine, but onlookers ended up cheering, which Kane said she prefers.

“If it was too quiet, I would have gotten a little bit nervous and distracted,” Kane said. “I’m better when people are cheering for me.”