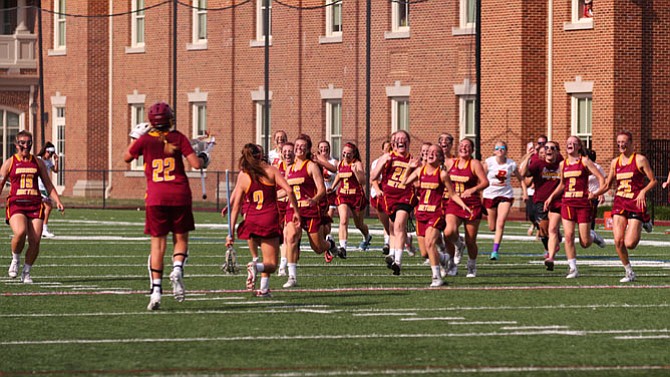 Members of the Bishop Ireton girls’ lacrosse team pose with the VISAA state championship plaque on May 16 at Randolph-Macon College.

The Bishop Ireton girls’ lacrosse program made history in 2014 while focusing on “six games in May.”

The Cardinals worked hard during the offseason and played a challenging regular-season schedule in preparation for the six victories necessary to win the Washington Catholic Athletic Conference championship and the Virginia Independent Schools Athletic Association Division I state title.

Ireton’s dedication paid off in the form of three conference tournament victories and the program’s first WCAC championship. The Cardinals then won three state tournament games, culminated by knocking off national power St. Stephen’s & St. Agnes in the state final. It was the first time the Cardinals had ever beaten the Saints.

Bishop Ireton returned most of its talented roster for the 2015 campaign. Led by head coach Rick Sofield, the Cardinals were considered one of the top teams in the country and at one point in the season were ranked No. 2 in the Nike/Lacrosse Magazine national top 25.

Ireton experienced some bumps in the road against a daunting regular-season schedule, losing 14-4 to top-ranked McDonogh (Owings Mills, Md.) and suffering a one-goal loss to WCAC foe Good Counsel, but otherwise the Cardinals continued winning as they focused on taking care of business in the postseason. After finishing the regular season with a 15-2 record, Ireton defeated Bishop O’Connell 19-7 on May 5 in the opening round of the WCAC tournament.

But while everything had gone to plan to that point, the Cardinals’ six-games-in-May outlook would require an adjustment.

On May 7, Holy Cross upset Bishop Ireton 10-9 in the WCAC semifinals.

“We stumbled,” Sofield said. “The girls were stunned after the game.” 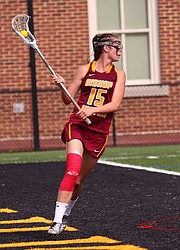 With their hopes of repeating as conference champion extinguished, the Cardinals turned their focus to the state tournament. After victories over Potomac School and St. Anne’s-Belfield, Ireton reached the championship stage with a chance at redemption.

With temperatures in the upper 80s on a sunny Saturday afternoon in Ashland, the Cardinals took on the Saints in the VISAA state final. Ireton jumped out to an early five-goal lead and St. Stephen’s battled back to tie the score in the second half. In the end, the Cardinals salvaged the 2015 postseason by earning some hardware and proving last year’s win over the Saints was no fluke.

Kelly Larkin scored the go-ahead goal with 16:55 remaining and Bishop Ireton repeated as state champion with a 12-10 victory over St. Stephen’s & St. Agnes on May 16 at Randolph-Macon College.

The Cardinals celebrated on the field after the game, posing for pictures in front of the stands.

“Our word the past two weeks has been redemption,” said senior midfielder Charlotte Sofield, who will play college lacrosse at the University of North Carolina. “Redemption is if you fall short or you make a mistake, you make good on it. We fell short of what we were capable of and in this game we redeemed ourselves and we made good on it.”

Ireton consistently won the draw early in the game and jumped out to a 5-0 lead. St. Stephen’s went scoreless for more than eight minutes, finally getting on the board when junior Ellie Carson found the back of the net with 16:27 remaining in the opening half.

The Cardinals led 8-5 at halftime and extended their advantage to 9-5 when Mathews scored with 22:28 left in the second half. The Saints wouldn’t go away, however, and responded with four consecutive goals to tie the score at 9 with 17:31 remaining.

“You can’t let yourself think that the game is over,” St. Stephen’s senior Ellie Majure said. “If you start thinking the game is over in the first five minutes just because they scored a few goals, it’s going to be a long 50 minutes.”

Ireton regained the lead when Larkin scored 36 seconds later and the Cardinals led for the remainder of the contest.

“Winning a championship is one thing, but repeating is another,” Larkin said. “As our coach says, [UCLA men’s basketball coaching legend] John Wooden said it takes talent to win a championship, it takes character to repeat. We definitely had the character and the poise on the field today and we got it done when we needed to.”

St. Stephen’s & St. Agnes entered the contest with a 28-0 record, including a 13-12 win over Georgetown Visitation in the ISL championship game, but the Saints fell short against the Cardinals for the second straight season.

Ellie Carson scored four goals for St. Stephen’s & St. Agnes during a 12-10 loss to Bishop Ireton in the VISAA state final on May 16 at Randolph-Macon College.

“Last year our motto was, ‘It’s not an accident,’ meaning any success we have is the product of hard work, it’s not an accident,” Rick Sofield said. “This year’s motto has been, ‘We’re not satisfied.’ ... The Holy Cross game, maybe we were a little too satisfied and that’s why we lost that game. That got us back where we needed to be mentally for this run in this playoff round. We weren’t satisfied. We wanted to show that last year wasn’t a flash in the pan.

“I thought we did really, really well with this team this year,” Saints head coach Kathy Jenkins said. “They exceeded our expectations the whole season. We had close games and we came back and this one we just didn’t finish. ... BI is such a great team; we knew it was going to be a tough game. They come out hard, they’re fast, they have size on us ... so I thought we did a great job and it could have gone either way, but it just didn’t go our way.”

Ireton finished the season with a 19-3 record. Despite the graduation of his daughter, Charlotte, Rick Sofield said he will continue coaching at Ireton.

“This is my passion,” he said. “I love doing this. These girls have bought completely into what we’re doing. We’re building something great here that we want to keep going for as long as possible. There’s no doubt I’m coming back next year.”