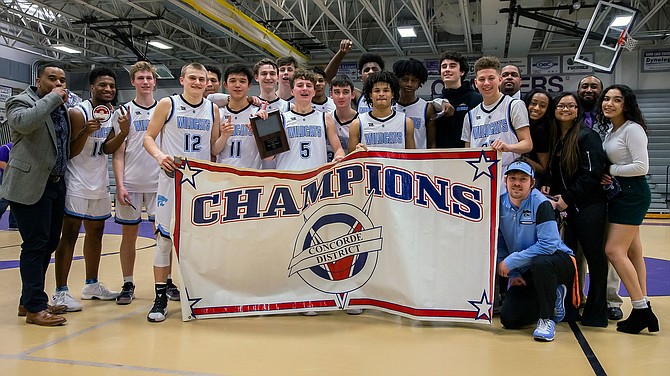 The Centreville Wildcats are the Concorde District Champions after defeating the Oakton Cougars 79-55. Photo by Will Palenscar 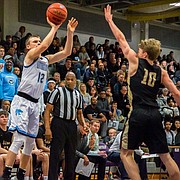 Centreville's Chris Kuzemka #12 prepares to release a shot before Ryan Jones #10 can get to Kuzemka's shot. 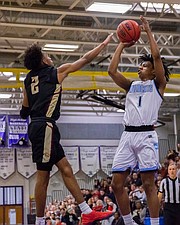 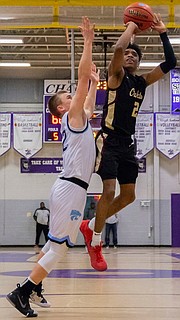 Oakton's Micah Johnson-Parrotte #2 led all scorers with 33 points in his team’s loss to Centreville in the Concorde District Championship.

The Concorde District Boys Championship was a matchup of the #1 seed Centreville Wildcats and #2 seed Oakton Cougars with Centreville winning both matchups in the regular season.

The Cougars scored 14 1st quarter points with Micah Johnson-Parrotte scoring 12 of them and Centreville scoring 13.

In the 2nd quarter Centreville took the lead for good outscoring Oakton 16-12 to give the Wildcats a 29-26 halftime advantage.

The 3rd quarter saw the Wildcats add to that lead converting on three 3 pointers bringing their total to eight for the game and giving them a 49-42 advantage with a quarter to play.

Centreville’s 79-55 win was led by Bryce Douglas’s 22, Lance Douglas’s 17 and Chris Kuzemka’s 15 points. Oakton was led by Micah Johnson-Parrotte, who had a game high 33 points, while teammate Garrett Johnson added 9 points. Both teams will compete in the regional tournament. Centreville improves to 18-5, Oakton falls to 14-9.