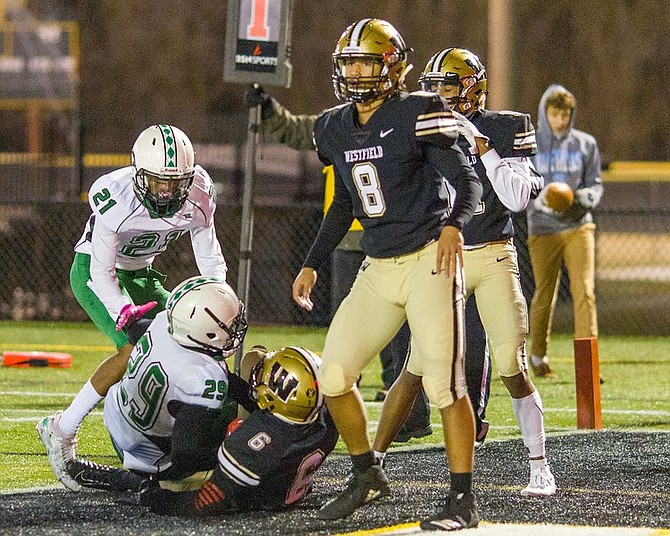 Camron Johnson #29 is in for Wakefield’s only points. Photo by Will Palenscar/The Connection 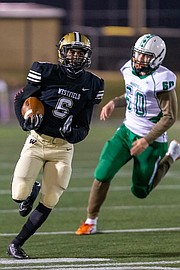 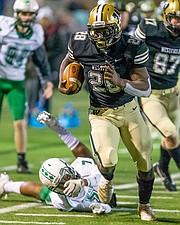 Mikal Legall carried the ball 14 times for 111 yards and 3 touchdowns.

The Warriors would strike first in the quarter when Camron Johnson rushed in from about 5 yards out with 6:30 to play on the opening quarter and Wakefield was up 7-0 after a successful PAT. Avery Howard’s 25-yard touchdown reception from Noah Kim and a successful PAT evened up the score at 7 with 4:35.

Mikal Legall would rush in for the first of his three running TD’s from 3 yards out, just 5 seconds played in the 2nd quarter. Westfield would now take the lead for good,14-7. ET Bushra then took a punt return 55 yards for a touchdown with 10:10 to play before halftime, the lead increasing to 20-7. The PAT was unsuccessful. Alex Richards then took a pass from Noah Kim 13 yards for a touchdown, and again the PAT was unsuccessful. The score was now 26-7. Westfield’s kicker Deshawn Paige then kicked a 29-yard field goal to increase the lead to 29-7.